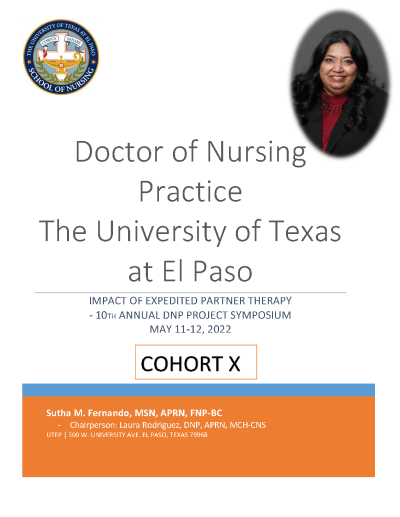 Sexually transmitted infections (STIs), including Chlamydia trachomatis and Neisseria gonorrhoeae, have reached record high rates in the United States. Sexually transmitted infections disproportionately affect reproductive-aged males and females 15–44 years of age, who account for 65% and 42% of the total reported C. trachomatis and N. gonorrhoeae cases, respectively. These infections are the most common treatable sexually transmitted infections in the United States. The purpose of this evidence-based practice project was to decrease the rates of recurrence of STIs in males and females older than 17 years at a private family practice clinic in Carrollton, Texas, in the Dallas metropolitan area over a period of 6 weeks. An average of 25 confirmed cases of STIs was observed quarterly in the clinic. In January 2022 alone, 20 cases of confirmed STIs were treated in the clinic, and EPT was offered for each sexual partner with whom they had had contact within the previous 60 days. Only ten of those 15 patients accepted EPT, with an acceptance rate of 57%. All twenty-five patients testing positive for infection, regardless of whether they accepted EPT, were asked to return for an infection check at 8 weeks after diagnosis to test for the rate infection recurrence. If EPT is found to be effective at reducing the rates of recurrence of infection in the sexually transmitted infection at the clinic, the intervention will be used on a permanent basis to reduce rates of recurrence of STI clinic-wide and in the community.