The use of valium in alcohol withdrawal 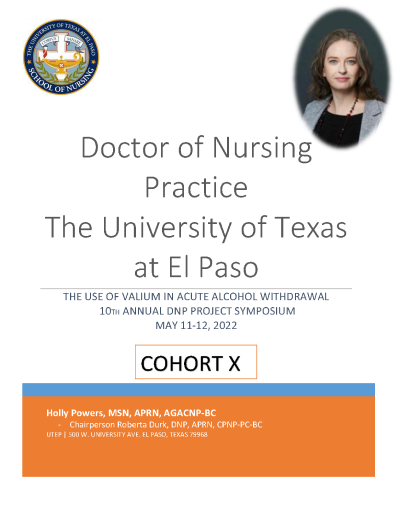 Background: Benzodiazepines are the primary medical intervention used in the hospital for inpatients suspected of acute alcohol withdrawal during their admission. Per Shu et al. (2015) a study completed in the 1960 compared Librium with placebo as well as other drugs which showed the therapeutic efficacy of benzodiazepines in alcohol withdrawal. “Alcoholism has been reported in 20% to 50% of hospitalized medical patients” (Maldonado, 2012), moreover, the data indicate that 39% of ICU admission are alcohol-related (Muzyk et al., 2011). This is noted in an inpatient unit where alcohol withdrawal is common, Ativan is the benzodiazepine of choice along with assessment using the CIWA-ar. However, there is another benzodiazepine that provides the same benefit of preventing severe alcohol withdrawal and delirium tremens without oversedation which can occur with escalating lorazepam dosing.

Methods: Lewin’s change model for quality improvement was utilized for this project. The QI implementation project was conducted from January 25 through March 3, 2022. During the same four weeks of 2021, hospital admission records were reviewed for the diagnosis of alcohol withdrawal in the same unit. CIWA-ar scores, type of benzodiazepine used, and the total amount of benzodiazepine used were compared.

Intervention: Valium, a benzodiazepine, is a rapid onset and long-acting medication used in alcohol withdrawal. It was prescribed to patients with a high likelihood of experiencing moderate to severe alcohol withdrawal during their hospitalization. Oral medications were used as IV medications are not prescribed in this unit. Oral valium, with dosing between 10 mg and 20 mg, was administered every hour for up to 3 hours based on the continued symptomology of the patient. This treatment plan followed with CIWA-ar for the duration of the withdrawal to ensure adequate treatment of symptoms for the patient. This method has been proven effective in preventing severe alcohol withdrawal, seizure activity and delirium tremens. This treatment plan also positively affects the length of stay, comorbid events, and the patients’ discomfort during the withdrawal process.

Results: A literature review indicated that there is no significant difference in the amount of benzodiazepine used with the symptom-based approach versus front-loading. There was, however, anecdotal findings noted difference in the level of sedation, reduced aggression, and ability to participate in a group. Also, patients in the QI project did not require escalation to a higher level of care due to progression of symptoms.

Conclusions: Provided benzodiazepines are available to patients withdrawing from alcohol, who can be closely monitored, the adverse events associated with alcohol withdrawal should be limited. The severity of alcohol withdrawal varies among individuals which should indicate a need for individualization of treatment. However, this is not the case, some patients risk not receiving adequate treatment for symptoms, risking worsening symptoms, seizure, and DTs while others may be over sedated or prescribed medication that they don’t need creating a dependence to benzodiazepines (Day et al. 2018).