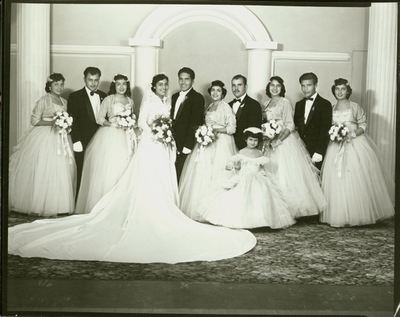 Photo taken October 23, 1955. From right to left: Beatriz Estrada, Emilio Estrada, Emma Garcia, Cecilia Herrera (bride), Raul Herrera (groom), Carmen Hernandez, Lorenzo Robledo, Irma Martinez, Rogelio Villareal, and Elisa Estrada. The flower girl is Barbara Burrola. The bride and groom had only known each other for five month before they married. They operated a restaurant, Casa Herrera, for many years. The developed a charity that brought children from Juarez orphanages to El Paso for a Christmas party every year. The first year they had 25 children at their restaurant; in later years, they brought as many as 200 children.