Desiree A. Medina, University of Texas at El Paso 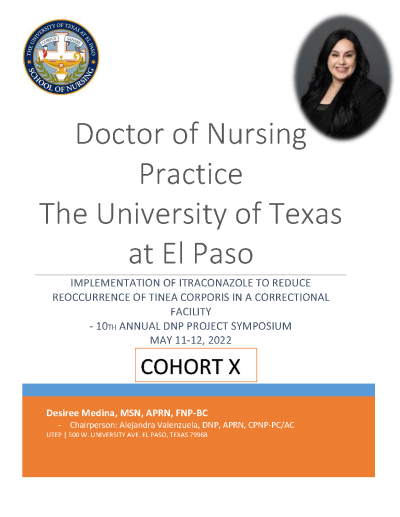 Tinea corporis is a superficial fungal infection that involves a circular pruritic rash on different parts of the body. Many individuals recognize this type of fungal infection as “ringworm.” Tinea corporis thrives in areas of the body that experience humidity and friction and can be spread from person to person. Vulnerable populations such as those in detention centers are more susceptible due to the environment and close quarters. During 10 days of reflective practice, more than half of the patients cared for developed reoccurring tinea corporis after treatment with fluconazole. After conducting a literature review, a variety of medications were identified for the treatment of tinea corporis, including fluconazole, terbinafine, and itraconazole. The medication regimens analyzed, revealed that itraconazole was the best for reducing the reoccurrence of tinea corporis. According to the literature, 100 mg of itraconazole should be given once daily for two weeks, which was not reflective of local practice. As a quality improvement project, the use of 100 mg of itraconazole by mouth for two weeks was implemented, and follow-up was performed at four weeks by assessing the elimination of tinea corporis according to the absence of itching, erythema, hypopigmentation, and breakdown of the skin. Individual skin sites were documented upon assessment of infection, and if consent was given, photographs were obtained and compared. The modification of treatment was successful. After treatment, the patient sites appeared clear with no circular pruritic rash. The project was found to reduce the cost of medication required for retreatment as well as the reoccurrence of tinea corporis among patients in the facility.

Medina, Desiree A., "Implementation of Itraconazole to Reduce Reoccurrence of Tinea Corporis in a Correctional Facility" (2022). Cohort X. 7.
https://scholarworks.utep.edu/cohort_10/7