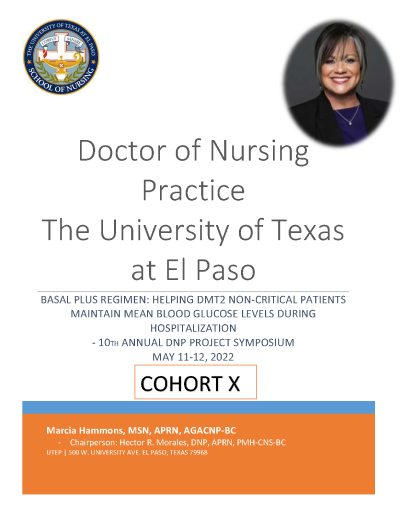 Diabetes mellitus type 2 (DM2) patients are at risk of episodes of fluctuating blood glucose levels when in the hospital. On admission at the target practice site, the home dose of oral hypoglycemic medication is typically stopped and replaced with sliding-scale insulin therapy. Hyperglycemia among the hospital population of DM2 patients is common, causing delayed healing times, increased length of stay, increased costs, and other medical detrimental factors. A doctor of nursing practice project was based on the findings from a randomized controlled trial of a basal-plus insulin protocol that lowered the mean blood glucose level for noncritically ill hospitalized DM2 patients. In the trial, adding a long-acting basal insulin to the short-acting insulin sliding scale yielded a drop in mean blood glucose scores, with minimal risk for hypoglycemia. A quality improvement project using Lewin’s change theory was planned and implemented using a Plan-Do-Study-Act cycle. Initially, 51 patients were started on the protocol; 4 received the protocol for the duration of their stay. Patients who otherwise qualified for the project were excluded from the project because of changes made by colleagues, a patient declining doses, patients being admitted to the intensive care unit, and patients receiving high-dose steroid therapy. In a comparison with the mean blood glucose level of similar patients who did not receive the protocol, the mean blood glucose level of the patients who received the protocol decreased during hospitalization by 25.52 mg/dL; the mean length of stay decreased by 1.75 days. This mean decrease in hospital length of stay in days equals a decrease in cost of approximately $6973.05. In conclusion, the basal-plus insulin protocol is straightforward, simple to include in a busy hospital practice, and offers several benefits.